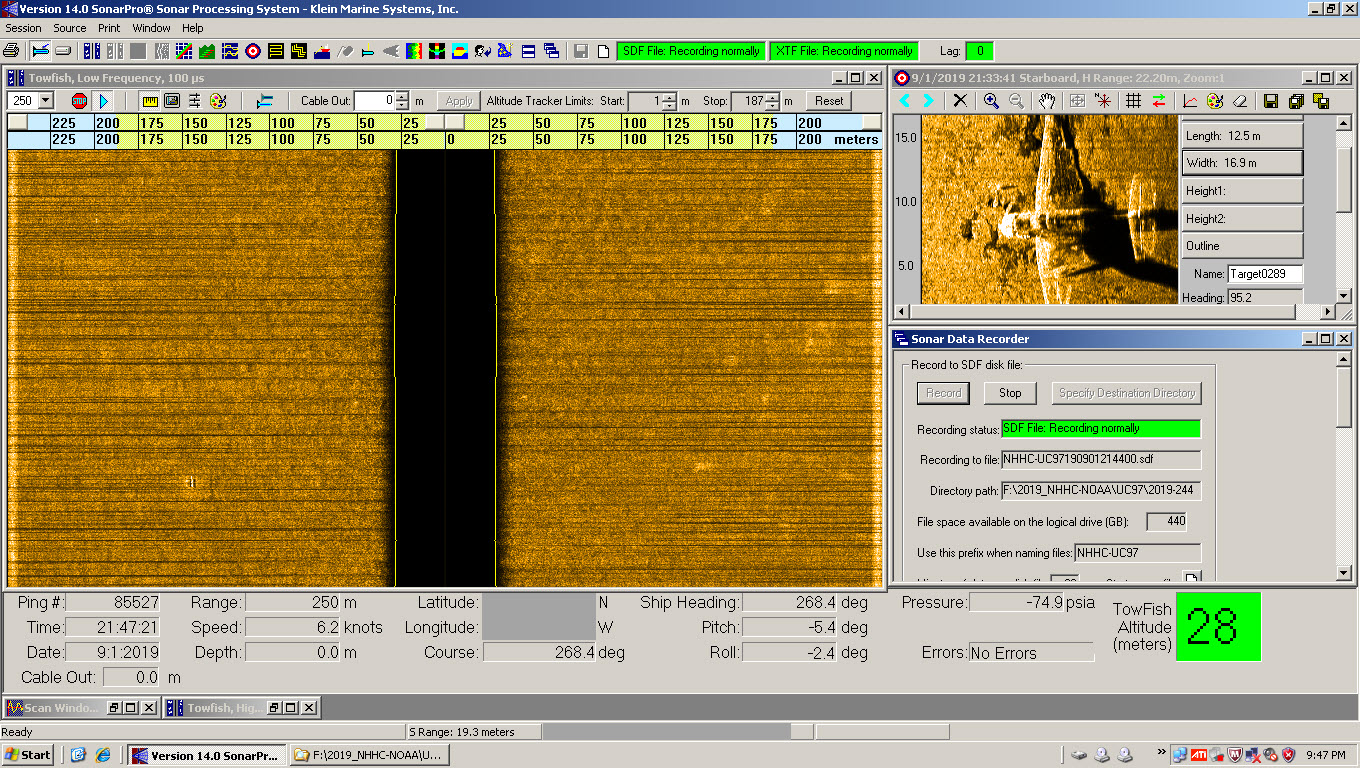 Did you know that there are about 120 World War II era aircraft lying at the bottom of Lake Michigan? The Navy used these aircraft to train and certify pilots to take off and land from aircraft carriers during World War II. U.S. Naval operations along Lake Michigan, one of the Great Lakes, began in 1923. Between 1923 and 1942, operations expanded as the Navy built hangars, airfields, and landing strips across the village of Glenview, Illinois. By 1942, the Navy had a robust presence on the shores of Lake Michigan. With the U.S. entrance into World War II, the Navy needed a location to train carrier pilots. The growing threat of enemy vessels and mines along the Pacific and Atlantic coastlines and an already strong Naval presence in the area made Lake Michigan the safest location for carrier training.

END_OF_DOCUMENT_TOKEN_TO_BE_REPLACED

One of Coast Survey’s navigation response teams (NRT) recently responded to a request by the State of Florida, who needed help surveying a submerged prehistoric archaeological site located offshore of Sarasota County. Last week’s survey and investigation were necessary to map the full extent of the site and the surrounding area. END_OF_DOCUMENT_TOKEN_TO_BE_REPLACED

Formed by retreating ice sheets over 14,000 years ago, the Great Lakes have long represented one of the most valuable fresh water resources in North America. They contain more than one-fifth of the world’s supply of fresh surface water, and the vast size is easily visible from space. From Native American hunting routes to French fur-trade exploration to influential battles in the War of 1812, the Lakes have proved a key platform for numerous historical events that shaped the development of the country.

Uniquely, these bodies of water served as the gateway to connect the booming production of an expanding population in the Midwest from 1825 to 1925. During this time, a broad range of wooden, sailing, and steam-powered ships trekked across the lakes, carrying coal, grain, and passengers. Due to unpredictable weather conditions, fire, ice, high-traffic areas, and an ever-increasing pressure to meet shipping quotas, hundreds of ships were lost in collisions and accidents. These incidents have earned this period the nickname “Shipwreck Century.” Today, the history of the “Shipwreck Century” is presented at Thunder Bay National Marine Sanctuary’s visitor’s center, the Great Lakes Maritime Heritage Center, in Alpena, Michigan.

Thunder Bay is located in Lake Huron, near one of the most historically dangerous areas of navigation in the Great Lakes. The sanctuary covers 4,300 square miles. In this area, over 200 shipwrecks are known to exist, and 92 have been discovered and accurately charted. The staff provides continual archaeological monitoring to ensure the preservation of the sites.

END_OF_DOCUMENT_TOKEN_TO_BE_REPLACED

Knowing the locations of shipwrecks and other obstructions has always been important for safe navigation ‒ but mariners are not the only people who want to know about wrecks. They are also important for marine archeology, recreational diving, salvage operations, and fishing, among other interests. Now, Coast Survey has improved our Wrecks and Obstructions Database, giving everyone easy access to new records to explore.

Historically, Coast Survey has maintained two separate sources of information on wrecks. We recently combined the sources, bringing together information on nearly 20,000 wrecks and obstructions.

END_OF_DOCUMENT_TOKEN_TO_BE_REPLACED

Good, informed decisions are often based on analyses of historic and present conditions. Researchers, decision-makers, and amateur history buffs find detailed documentation of past conditions in the thousands of Coast Survey charts, dating back to the mid-1800s, in our Historical Map and Chart Collection.

Just like present day nautical charts, historic charts contain a wealth of information about geographic features — including their names, shape, and condition. Geographic names are important locational references for today’s emergency responders, but current and historic names also convey important aspects of local people and culture, which may persist through time.

END_OF_DOCUMENT_TOKEN_TO_BE_REPLACED

How do ocean explorers know where to look when they investigate and document the historical secrets of the deep? Well, archaeological expeditions use a myriad of modern surveying technologies. Recently, when NOAA’s Monitor National Marine Sanctuary was investigating a World War II underwater battlefield site, they called on a surveying expert with NOAA’s Coast Survey to assist.

END_OF_DOCUMENT_TOKEN_TO_BE_REPLACED

Coast Survey’s Navigation Response Team 4 is conducting a year-long survey of the sea floor in the Port of Houston and Galveston Bay navigational areas, re-measuring ocean depths and searching for dangers to navigation. Coast Survey will use the data to update future nautical charts to help mariners protect lives and increase shipping efficiencies. Recently, the team also found an opportunity where they could support marine archeological preservation.

Last week, the navigation team worked with federal and state partners who help us understand the rich history – and the secrets of human sorrows – lying on the seafloor. In collaboration with NOAA’s Flower Garden Banks National Marine Sanctuary and the Texas Historical Commission’s Marine Archeology Division, the navigation response team — with the State Marine Archeologist onboard —  re-mapped the location of two historically significant wrecks. (Some of the data was collected under an antiquities permit, as Texas requires for investigating historic shipwrecks in state waters.)