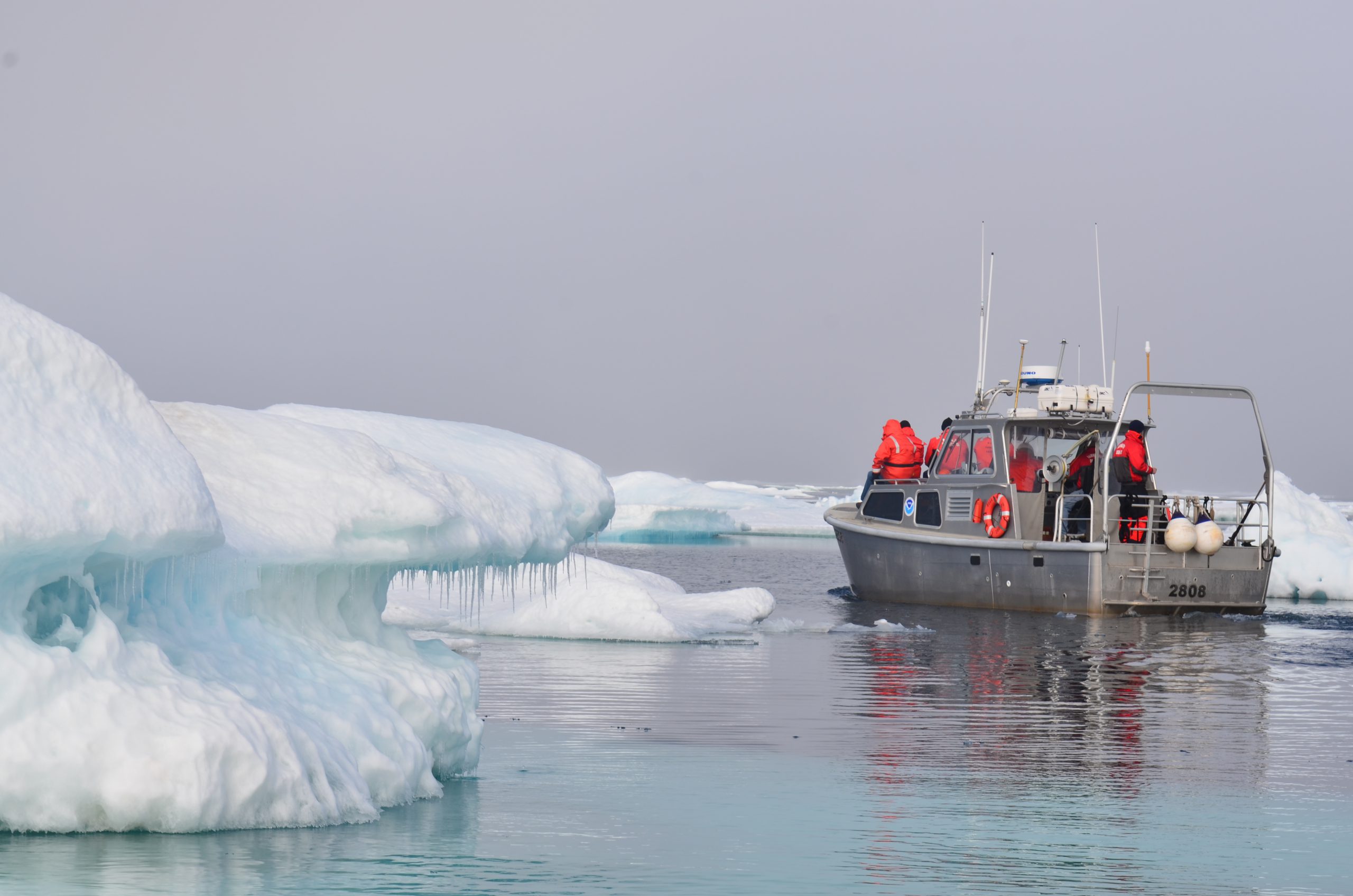 President Thomas Jefferson, who founded Coast Survey in 1807, commissioned Lewis and Clark’s Corps of Discovery Expedition in 1803, the first American expedition to cross the western portion of the contiguous United States. Today there remains a vast western America territory that is largely unknown and unexplored – the U.S. waters off the coast of Alaska. As a leader in ocean mapping, NOAA Coast Survey launches hydrographic expeditions to discover what lies underneath the waves.
Alaska is one-fifth the size of the contiguous United States, and has more than 33,000 miles of shoreline. In fact, the Alaskan coast comprises 57 percent of the United States’ navigationally significant waters and all of the United States’ Arctic territory. Alaskan and Arctic waters are largely uncharted with modern surveys, and many areas that have soundings were surveyed using early lead line technology from the time of Capt. Cook, before the region was part of the United States. Currently only 4.1 percent of the U.S. maritime Arctic has been charted to modern international navigation standards.


In part, Arctic waters are difficult to survey because of the sheets of sea ice persist throughout the majority of the year. Traditionally, thick ice sheets have restricted the number of vessels that travel in the area. But Arctic ice is declining and sea ice melt forecasts indicate the complete loss of summer sea ice in the Arctic Ocean as early as two or three decades from now, meaning year-round commercial vessel traffic is likely to increase.
Given the vast expanse of ocean to be charted in the U.S. Arctic, Coast Survey determined charting priorities and coordinated activities in the U.S. Arctic Nautical Charting Plan, the third issue of which was released in August 2016. The plan proposes 14 new charts and was created following consultations with maritime interests, the public, and federal, state, and local governments.
In July and August, the crew aboard the NOAA Ship Fairweather is fulfilling a piece of the U.S. Arctic Nautical Charting Plan as they conduct  hydrographic surveys in the vicinity of Cape Lisburne and Point Hope, Alaska. Seventy percent of this area has never been surveyed, while the remaining 30 percent has only lesser bottom coverage from single beam surveys conducted in the early 1960s. The data will be used to produce nautical charts that align with Coast Survey’s new rescheming efforts as stated in the National Charting Plan.
The data Coast Survey collects is the first step, as exploration is an iterative process and bathymetric data provides a foundation from which to build. The benefits of surveying extend beyond safe navigation. Accurate seafloor depths are important for forecasting weather, tsunami, and storm surge events that affect local communities. Bathymetric data also informs the discovery of seabed minerals, historic wrecks, and natural resource habitat mapping.

As with any new endeavor, there is a balance between exploration, safety, environmental conservation, and commerce. Lt. Bart Buesseler is Coast Survey’s regional navigation manager for Alaska and works directly with Alaskan communities, mariners, and port authorities to communicate local needs, concerns, and requests. As many Native Alaskan coastal communities still rely on subsistence hunting of marine mammals, these changes in ice and vessel traffic create a direct impact to their way of life. With that in mind, Lt. Buesseler works with communities and maritime users to identify the priorities that will best support the needs of an area while still addressing the concerns of the communities. It is through this collaboration that the balance between exploration, safety, conservation, and commerce can be achieved.
The Lewis and Clark expedition aimed to map a new territory, learn about the environment, and find a practical land route through the continent. By conducting hydrographic surveys to collect depth measurements of the ocean – and putting those markings on a nautical chart with other navigation information – Coast Survey leads the way for safe maritime passage in the U.S. Arctic.