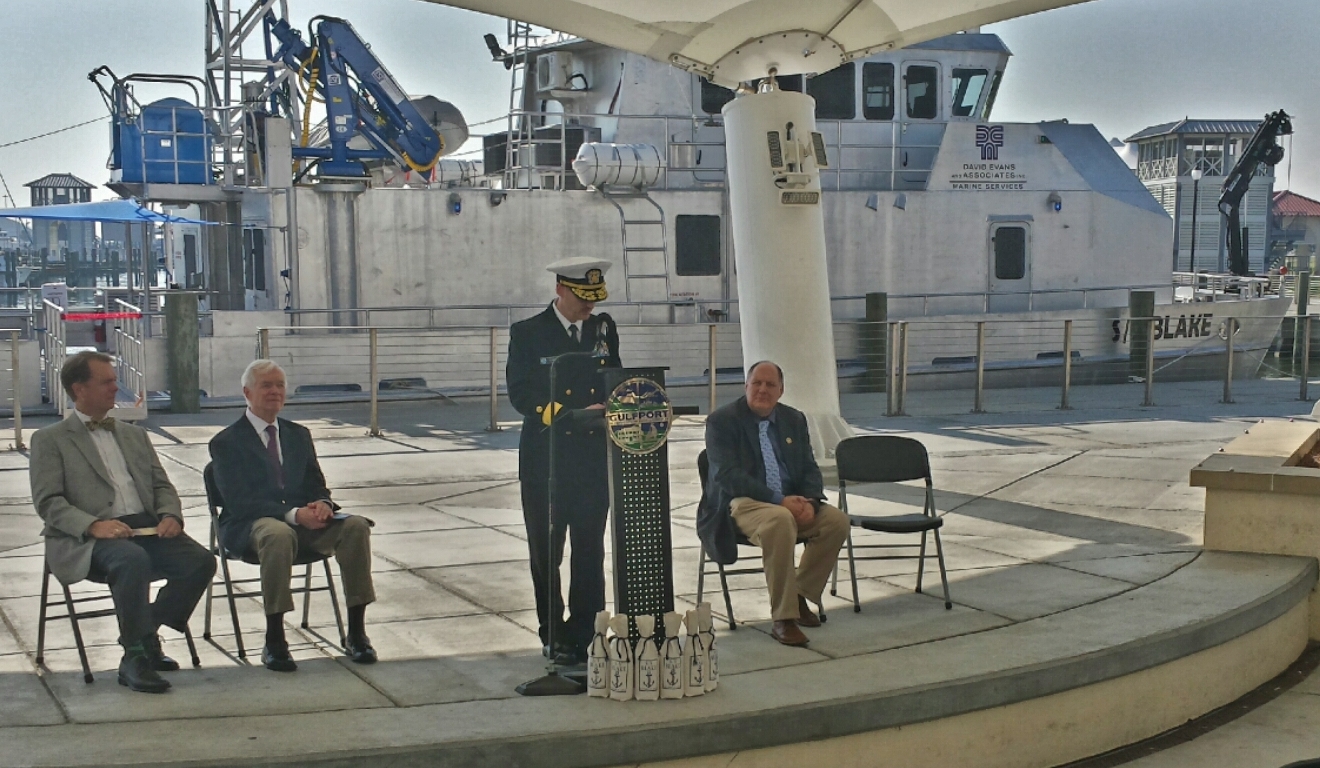 Glang pointed out that, for the past 15 years, NOAA has fulfilled its charting mission through a successful partnership with private sector surveying firms.

“David Evans and Associates, who owns and will operate the Blake, has been an important partner in that effort,” Glang said. “They conducted their first survey for Coast Survey in 1999.  In the last 15 years, they have completed 72 hydrographic surveys – nearly 1200 square nautical miles – in the coastal waters and bays of seven different states.”

“David Evans and Associates consistently produces outstanding hydrographic surveys for NOAA.  And, they are pioneers in applying new surveying technologies and methods.”

U.S. Senator Thad Cochran, who did the honor of breaking a Champagne bottle across the Blake‘s bow, spoke of the vessel’s value to the nation.

“The survey vessel Blake is an example of the skilled workmanship of our Gulf Coast shipbuilding industry. This vessel will provide an important national seagoing capability to perform valuable research for our state and nation,” Cochran said. “I commend David Evans and Associates, Inc. for its hard work in constructing a world-class research vessel that can serve our nation for decades to come.”

The custom-built Blake is an aluminum catamaran. The vessel is designed to be a stable, efficient and cost-effective survey platform with wave-piercing bows, tier-3 diesel engines, twin 50-kilowatt generators, and a full suite of state-of-the-art survey instrumentation. Built by Geo Shipyard, Inc. in New Iberia, Louisiana, the new vessel will complement the firm’s national operations and expand DEA’s hydrographic and geophysical survey and marine science capabilities in the Gulf of Mexico and beyond.

The new vessel is named after the 19th century U.S. Coast and Geodetic Survey steamer George S. Blake, an oceanographic and hydrographic vessel renowned for testing innovative technologies such as the Pillsbury current meter, which was the first deep-sea current meter, and the Sigbee deep-sea sounding machine. The federal Blake was commissioned in 1874, operated in the Gulf of Maine, the Gulf of Mexico, and the Caribbean Sea. The Blake’s accomplishments are documented in Three Cruises of the BLAKE, by Alexander Agassiz. The vessel had numerous seafloor features named after her, including the Blake Abyssal Plain, Blake Plateau, Blake Canyon and Blake Ridge, all of which are off the southeastern coast of the U.S.

Noting the advanced technologies onboard the S/V Blake, that were not even imagined 140 years ago when the USC&GS steamer Blake did it’s innovative work, Glang congratulated the firm on its significant contribution to the survey mission.

“I look forward to the legacy of accomplishment and innovation that the S/V Blake begins today,” Glang said, “and to a sustained partnership between David Evans and Associates and NOAA.”

For more, see this news report from WLOX TV.