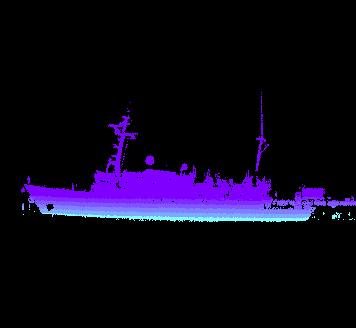 How tall is that rock, really? Is that islet charted correctly? Mariners will have greater confidence in the location and height of charted features as NOAA’s hydrographic ships increase their use of newly adopted laser technology to measure and locate topographical features like rocks, islets, and small islands.

Recently, Lt. j.g. Patrick Debroisse, junior officer on NOAA Ship Fairweather, trained his NOAA Ship Rainier colleagues on how to use the topographic laser that they will soon be receiving.

“Fairweather used this laser throughout this past season for feature attribution, and I was tasked with creating the procedures and training other ships,” Debroisse reports. “Rainier will be the next ship to receive the lasers, followed by the East Coast ships [Thomas Jefferson and Ferdinand R. Hassler].”

NOAA charts features such as rocks, piles, islets, kelp beds, and buoys, to give the mariner a clear picture of the dangers that could be in the area. Along Alaska’s and Maine’s rocky shores, for instance, features can be especially important because the tide ranges can be large. It’s especially important to accurately measure a rock at low tide, so a mariner will know its depth when they can’t see it at high tide.

Charted features are also used for visual points of reference during navigation.

Until recently, hydrographic ships’ launches were used to locate the features. To get a reasonable location, the launch would carefully approach the rock or other feature, and “kiss” it with their bow. They would then add the five feet from the boat’s GPS unit to the feature, and mark it on their field hydrographic sheets for use by the cartographers. If the seas are too heavy, or the area too rock-strewn, the surveyors stand on the ship or shore, and use a hand-held laser range finder to measure the height and distance of the feature, and then note the time so it can be corrected for the tide.

This laser technology will be safer than using a launch, and more precise than is possible with the human eye. The laser uses focused light to find and place objects accurately, similar to the way sonar is used to find the seafloor. The laser head produces sixteen laser beams, which reflect off the target object and are received back by the laser head. The computer then uses that data, along with precise positioning and attitude (roll, pitch, and yaw — or orientation) data, to determine the height and location of the object.

These infrared lasers are invisible and completely safe to the eyes of humans and any animals in the area. Also, unlike airborne lidar units that obtain shallow water bathymetry, the ships’ laser cannot penetrate the water.

“Fairweather worked with the Coast Survey Development Lab to test this laser scanner, to determine its feasibility as a topographical tool in the Alaskan environment,” Debroisse says. “We found that this laser method increased the speed and accuracy of data acquisition, and increased the safety of the boat crews completing these surveys.”

And safety, after all, is important for everyone from the NOAA charting teams to the millions of chart users.