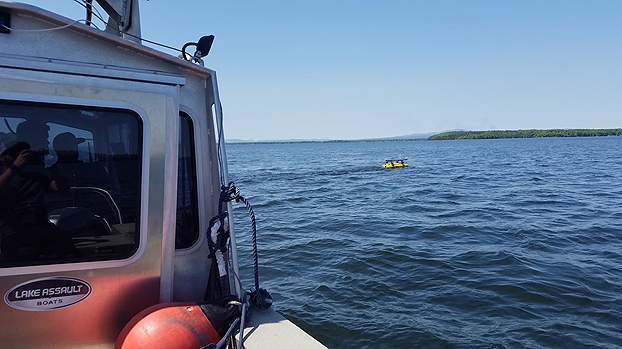 At the request of the NOAA Great Lakes Environmental Research Lab (GLERL), NOAA’s Office of Coast Survey deployed a survey team and a new autonomous surface vehicle (ASV) to gather hydrographic data in and around the narrow causeway inlets that dot the Lake Champlain basin in Vermont. GLERL will use the data to improve flood forecast models and analyze flood mitigation strategies in the Lake Champlain-Richelieu River system as part of a U.S. and Canada study led by the International Joint Commission.

Lake Champlain drains northward to the St. Lawrence River (via the Richelieu River) and is part of the Great Lakes system. In 2011, the lake reached record water levels due to large amounts of spring precipitation, snowmelt, and runoff. This water caused more than 60 consecutive days of severe flooding that affected thousands of U.S. and Canadian residents.

To gather hydrographic data that will improve lake modeling and forecasting going forward, a Coast Survey navigation response team (NRT) deployed a Seafloor Systems Echoboat to survey areas of the basin that are too shallow for traditional survey vessels to reach. In this way, the ASV acted as a force multiplier to the NRT survey vessel. Coast Survey acquired the Echoboat earlier this year, and it is Coast Survey’s first ASV to be equipped with multibeam sonar—the same type of sonar that larger NOAA survey vessels use to gather high resolution hydrographic data. With the use of this technology, the data gathered by the ASV system may be included on NOAA navigational products.

This was the inaugural operational use of the Echoboat, and allowed the team to gain experience setting up, running, and maintaining the ASV. Identifying and addressing software and hardware issues now prepares the team for future deployments.

Prior to the survey, much of the hydrographic data for Lake Champlain was well over 100 years old and of sparse density. Developers at GLERL needed more detailed hydrographic information in several shallow water areas in the northern sections of the lake to complete hydrodynamic models. Lake Champlain is a complex system populated with islands spread across multiple basins, many of which are connected by bridges and causeways. Critical to the flow of water between the different basins of the lake are multiple narrow, shallow inlets bisecting these causeways. The survey dataset Coast Survey delivered to GLERL is key to knowing the volume of water that flows through these bottlenecks in order to model circulation, water levels, and the resulting floods in the lake.